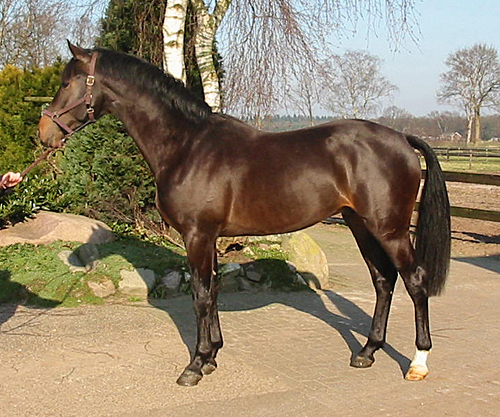 More on his pedigree, click on this link; http://www.allbreedpedigree.com/cancun+vdl

We are producing this lovely horse VDL Cancun starting this 2006 season with 4 y'old showjumping classes. He was the winner of his German performance test before coming to Ireland, showing both his quality in jumping and dressage.

Like Cancun, Corland also won his performance test but in Denmark. Corland comes from one of Holstein's best performance families which goes back to the famous Retina, twice winner of the Hamburg Derby.

In his first breeding year, his son Pacific was immediately approved and became Champion of the Stallion Test. His daughter Pendence scored 87 points for her mare test. This was the highest score of the whole last year.

His sires sire Cor de la Bryere is not only a leading sire but a sire of sires. His full brothers Caletto I, Catetto II and Caletto III were stars also as were Calypso I, II,III, IV and V !  Cor de la Bryere bred International progeny with Corrado, Cordalme Z. The Olympic Champion Classic Touch and Calvaro. He sired our own famous Cavalier whose progeny had a fantastic impact on for Irish breeding in Irish and International showjumping, and even eventing. When Cor de la Bryere first started his stud career from a small number of foals he amazingly managed to produce Olympic horses in both Showjumping and Eventing from his very first crop.

His dam, Nakita (by Libero H) is a full sister to two Grand Prix Showjumpers, O'Libero riden sucessfully by Richard Davenpost and Mellisimo jumping in the USA. Nakita also bred the Champion foal at Zangersheide in 2003.

More info when I get it from VDL